Lunch Ladies Interview: Learning What it Takes to Trust the Universe and Hide the Body

Ubiquitous Horror got the opportunity to sit down with the writer and the director of Lunch Ladies, Clarissa Jacobson and Josh M. Logan, to get a little background into what it took to create this awesome short.

From the obsession with Johnny Depp to the dance scene in the cafeteria to the blood-soaked kitchen, this film was one that grabbed me from the start and kept a smile plastered on my face. After watching this short, I not only wanted more but I just wanted to know more about what went into this. If you’re reading this, you probably love horror but what would make someone who can obviously write comedy, choose to write horror? According to Clarissa, it all started with a writing class when she learned, “I have this dark side that I didn’t really know existed!” Comedy was where her writing began, but she then toyed with the dark side when she wrote a story about Countess Elizabeth Báthory, the Hungarian serial killer, and pitched it to her writing class.

While she never actually planned on going through with the story because she was used to writing more sweet things, her teacher told her, “You have to write that, you have to write that because you’re scared to write it.” After that, she was trapped in the darkness, allowing it to guide her hand in writing Lunch Ladies. While she is not afraid to go back to the sweet stuff, it was that story about The Countess of Blood that helped her writing evolve into the horror genre.

Lunch Ladies is a 19-minute short about two high school lunch ladies (played by Donna Pieroni and Mary Manofsky) obsessed with becoming Johnny Depp’s personal chefs but then find themselves in hot water when they kill a student.

In only 19-minutes, the cast and crew of this film was able to grab the audience, make us laugh, make us cringe, and make us all swoon over Johnny Depp, but how long did it actually take. Let’s be honest here people, life sometimes slows down the production of projects, but once you can gather a crew like this one, with determination and a knack for hardcore planning, everything just falls in place and for Lunch Ladies it took about a year from the start to the final print.

However, this crew didn’t just build itself. Before Clarissa found Josh, she had another director who refused to do the project for many reasons, one being, “No one wanted to see two middle-aged women on screen”. With that in mind, Clarissa went on to write a whole new version of her film, one she was not happy or comfortable with but even the new script wasn’t good enough for the director and he still wasn’t on board with her ideas, finding many excuses to not work on the project.

While that might leave others bitter, Clarissa found strength in her mentor Joe Bratcher (producer/head choreographer) and friend Shayna Weber (producer) before branching out to find someone new. After sending the new version of the script to Josh, he was willing to work with her but it wasn’t until he read the original Lunch Ladies script that he said, “Horror fans are going to freaking love this!” But what was it that made Josh say “yes” to this script when the other director said it would go nowhere? He stated, “It spoke to me instantly, gave me fertile ground to work with, and backed by an incredible team of creatives – I couldn’t NOT do it!” The perfect thing is, if the original director didn’t wait almost a year before dropping out, Josh would have never been available to direct this project, as he was working on other projects at the time. Clarissa went on to express how she now feels towards the previous director, “Now I just feel like, that’s the past…the reason I bring it up is not to like dog on him but for other people to know that you have to be so strong in your convictions, that there’s going to be people that are going to tear you down and you have to surround yourself with people that are going to lift you up. You have to surround yourself with people who believe in you, even when you don’t. You have to be your biggest fan because I could have quit after that but I didn’t.” Inspiring words and ones that we all need to take to heart. Even though Clarissa wanted to work on the project sooner, it was the wasted time on the part of the first director that paved the way for the crew to fall into place, Clarissa stated, “I am thankful because there’s nobody that could have done this better than Josh.”

Finding a school that would allow a crew in to film a bloody horror movie about employees who kill a student was something the Lunch Ladies team knew would be difficult, but they weren’t expecting just how difficult it would be. Clarissa stated, “Schools are one of the hardest locations you can get,” she went on to say, “I went to the public schools first because I thought that they would be open to it, but the public schools didn’t want anything to do with it.” After calling over a hundred schools and even being told by one school that there was no chance they would film there, they were left disappointed and confused about what to do next. However, there were two schools who were happy to help and believe it or not, they were both Catholic schools. So, two choices, two visions, two chances for this film to happen and they jumped on it, picking the school that would best fit into the ideas they had in mind. The wonderful thing about whole situation is how the money that was used to film at the school was put towards creating a reading program for the students.

The cast and crew of Lunch Ladies faced many obstacles, from the original director to finding the location to not knowing how many extras would actually show up and even not knowing how the main actresses would portray the characters. The unknowns the cast and crew faced might have left many others running for the hills, but not them. They were able to band together and created something amazing. Josh talked about how the trust level of the cast and crew on any set is important, as everyone is working towards one goal. Team work is the most important part because everyone needs to be on the same page to complete the task at hand. He went on to say, “When an actor gives a performance, when a one-shot special effect goes off, when a stunt is performed, when a prop shows up on set for the first time, when the sound recordist places a lavaliere on an actor for an emotional scene – a hundred people are all working for one single purpose: recording that moment perfectly.” Clarissa learned how to truly trust the universe while working on this film. She stated, “This is the first time I’ve ever seen it [the universe] in action.” She went on to explain that she had never done a movie before and that she had no other choice but to let go and allow the universe to take over. She, like Josh, talked about how trust was the number one important thing because all she knew for sure was what she was doing but she just had to trust that everyone else would do their part. One week before the shoot, their set designer quit, leaving the entire crew to hope the universe had something better planned for them. Sure enough, they found the amazing husband and wife team, Alicia and Ray Ho, who went above and beyond what was expected of them and absolutely killed it.

Those involved with the making of this film had so many hoops to jump through but they did it so perfectly! I couldn’t be more thrilled about what happens next with the Lunch Ladies movie. Let’s hope there is a lot more Johnny Depp in the future and a hell of a lot more blood!

So, what’s next? What can we look forward to from Clarissa Jacobson and Josh M. Logan?

Clarissa is looking forward to the Lunch Ladies feature getting made but she also has seven more scripts and she keeps on writing, which means we have so many more projects that we can eagerly wait for!

Josh has an interactive comedy/drama that he worked on called The Garage Sale now available to watch. It’s three 20-minute films that happen simultaneously at the same location. Follow the links to find out more and to watch the trailer. He has also produced a feature documentary called The Disunited States of America about the recent election.

Let The Right One In

The Shining – A True Fear for her, as she still cannot watch it alone

The Thing – “It had all the right magical balance of deep seriousness, extraordinary, diverse casting, outstanding performances from every actor, paranoia, claustrophobia, tension, ground breaking special effects, art direction, photography and sound design – – it’s basically a perfect movie.  I’ve seen it dozens of times, and it draws me every single time the same way a Hitchcock, Polanski, Billy Wilder, or Sidney Lumet movie might.  It’s a classic movie from a master at the top of his game, regardless of genre.”

Cabin in the Woods

Zach Synder’s Dawn of the Dead

Though, he did feel he needed to stop as he could go on forever! 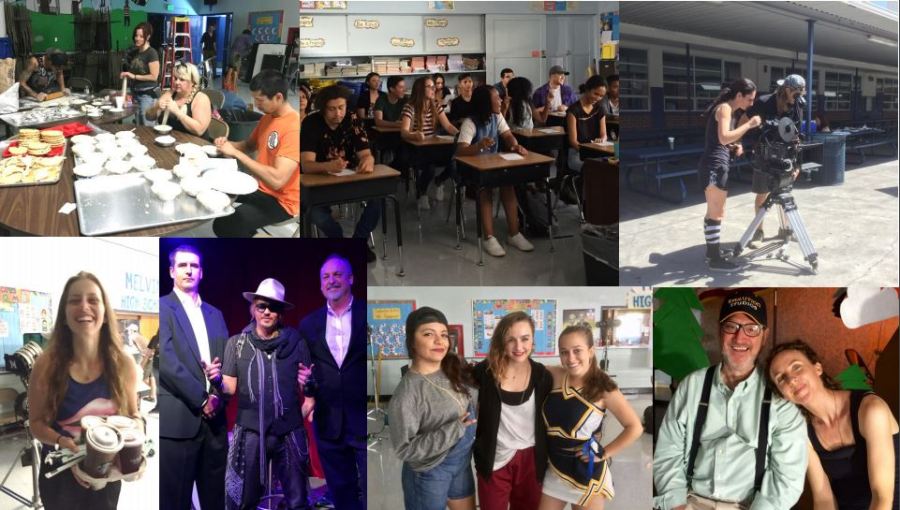 Siobahn Harris graduated from Southern New Hampshire University with honors, earning her bachelor’s degree in Creative Writing and English with a concentration on fiction writing. She worked for three months editing non-fiction books for Motivational Press and now runs a blog page sharing horror themed short stories and movie reviews. While she enjoys editing, her true passion is using her creativity to create new and unique stories that can truly scare her audience. Her dream is to one day put her writing skills to the test and work with a team to develop a horror themed video game or movie. She plans to continue learning as much as she can about the writing industry to perfect her skills and someday rule the world. View all posts by Siobahn

2 thoughts on “Lunch Ladies Interview: Learning What it Takes to Trust the Universe and Hide the Body”

Looking for something in particular?